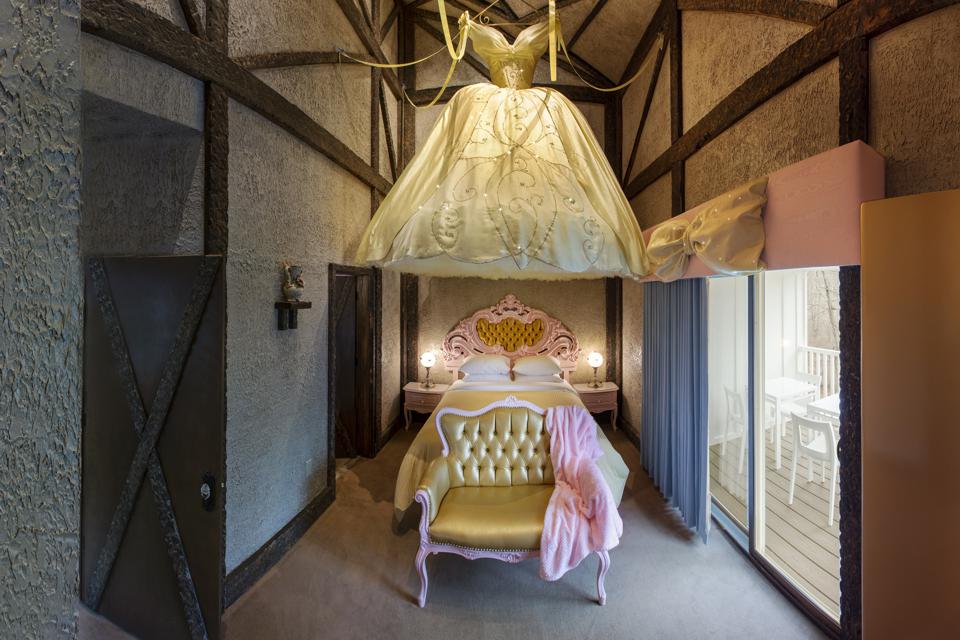 Is This The Most Instagrammable Hotel? in Forbes

With many 2020 vacations canceled, travelers are looking for any way to feel a sense of escape. Well, one Catskills hotel is taking that idea to a whole new level. The Roxbury at Stratton Falls celebrated the grand opening of its Tower Cottages this summer that all feature bespoke fantastical themes.

The inspiration for the eight cottages came from Hollywood, fairy tales, and even scientists. But more than just a few themed items scattered about, the designers went out of their way to make each room akin to a film set. The “Game of Thrones” cottage called the “Crown of Pendragons” comes complete with an 85-gallon circular tub with a three-tiered, 20-foot high chandelier hovering above. The cottage-inspired by famous astronomer and physicist Galileo comes with a personal telescope. And a fairytale fantasy “Cinderella’s Gown” welcomes guests with an 18-foot ball gown doubling as a bedroom canopy and an enormous pumpkin morphing into a golden-carriage style bathroom.

“There was a moment we turned a corner walking down the river, and the waterfall lay before us roaring because it was spring and turned and looked at each other and decided—we’ve got to find a way to make this happen,” Greg Henderson, co-owner of The Roxbury, told me. “It was at that moment that we both had the same impulse to make the experience fairytale-esque to recreate the feeling down at the base of that waterfall. If fairies exist—there’s got to be some at the base of our waterfall.”

Of course, this is just the latest portion of the already quirky hotel located two hours from New York City. The motel portion of the hotel pays homage to the roadside motel era and when the Catskills were in their heyday in the ’60s. Here you’ll find themed rooms as well that honor the hit TV shows of the time.

Read more about the most Instagrammable hotel here.