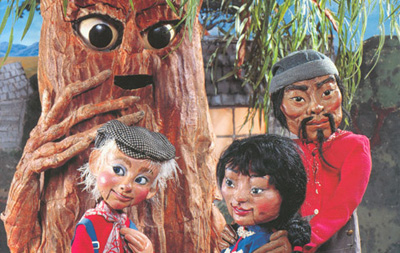 This piece tells the story of a young Chinese girl who immigrates to the American frontier, and finds herself in a swirl of other immigrants and cultures. But she possesses special gifts. She has been taught the healing power of plants and has a secret friend…the mysterious spirit who inhabits a beautiful Willow Tree!

When the THE WILLOW GIRL meets two Irish brothers, one generous and good, the other selfish and unkind, they all discover that the magic of The Willow works two ways. This rod puppet show features a huge, gracefully animated Willow Tree and is a wonderful blend of humor, mystery, drama and magical effects.

The story is illustrated with original and traditional fiddle music.

Since 1979, John Potocnik and Carol Mandigo, co-founders of the Catskill Puppet Theater, have been touring internationally, enchanting young and old with their delightful musical productions!

The Catskill Puppet Theater takes great pride in carrying on in the living tradition of the old traveling puppet troupes, bringing high quality children’s theater to over 100,000 people each year!