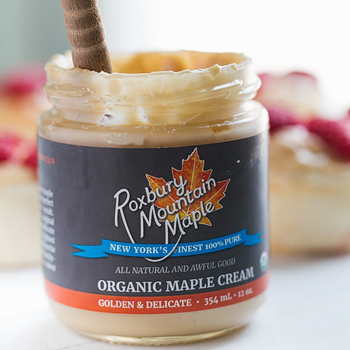 Set in the beautiful Catskill Mountains of upstate New York, Roxbury Mountain Maple has been providing the region’s finest, purest maple syrup since March 2011. This is a new adventure on an old farm—an old farm with fifty acres of sugar maples. Years ago, some of the trees were tapped by hand and the sap was boiled down in an old sugarhouse that now serves as our bicycle shed. Now the full potential of the property is being realized, with a new state-of-the-art sugarhouse, 25,000 taps in sugar maples, fresh inspiration, and, of course, our commitment to producing the highest quality, purest maple syrup available. We hope you’ll come by some time, either to our website or to our sugarhouse itself, and give some Roxbury Mountain Maple syrup a try. And if you’re ever in Delaware County when the sap is flowing, be sure to stop by: there’s nothing quite as good as syrup straight out of the evaporator. Roxbury Mountain Maple is very much a family operation. From the owner, Dave Holscher, to the youngest of his eight children, Joel, nearly everyone in the Holscher family is involved, either in the preparation of the facility or the production of the syrup. When you place an order, one of the Holschers will fill it—one of the Holschers who is not tending the goats, studying geometry, attending college, or teaching English in Korea. Working as a family is our specialty, as well as a part of our home education program, and you won’t be disappointed with the results.